Coiba National Park consists of Coiba itself, plus 38 smaller islands and the surrounding waters. The total surface area of the park measures 270,125 hectares (1,043 sq. miles), of which 80% is marine environment. The marine area contains over 170 hectares (420 acres) of coral reefs.

Coiba was inhabited by indigenous people until the early 16th century, when Spanish conquerors took all inhabitants to work the gold mines in the Darien. Between 1919 and 1991 Coiba housed a penal colony, and almost no-one was allowed on the island. 1991 Coiba was declared a National Park and all prisoners were transferred to a facility on the main land; the last inmates left in 2004.

A year later, in 2005, Coiba National Park was declared a World Natural Heritage site. One of the main reasons is the presence of endemic species (species that occur only on Coiba and nowhere else). Another reason is that evolutionary processes leading to new species are occurring on Coiba which can be studied by scientists.

Snorkeling at Coiba is among the best in the world. You often encounter butterfly fish, angel fish, parrot fish, hawk fish, file fish, moorish idols, wrasses, white-tipped reef-sharks (harmless) and hawksbill turtles. Schools of small fish like sergeant majors and scissor-tailed chromis surround you. Razortails and bigeye jacks pass by while you snorkel. If you are lucky, you might see a sea horse, a huge snapper, grouper or a nurse shark on the reef. The reefs are also home to hawksbill, green and olive ridley sea turtles. 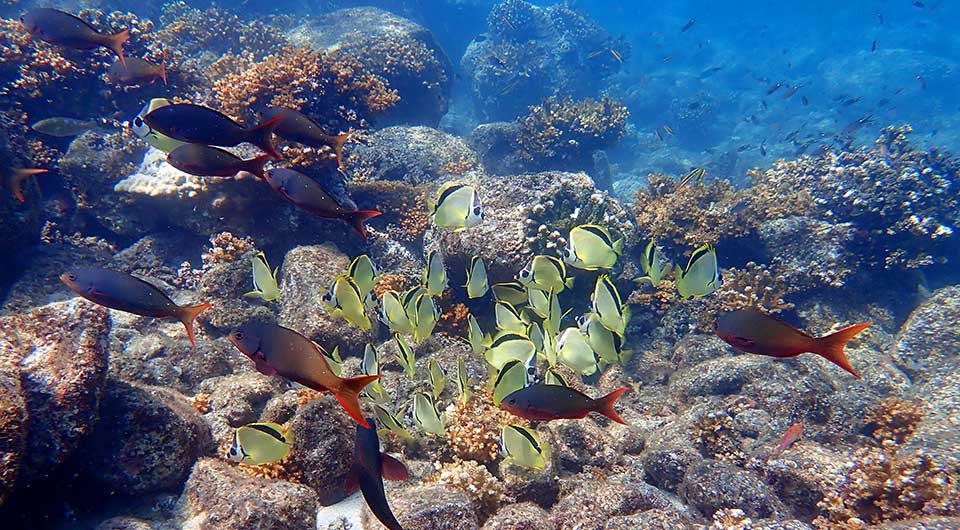 The edges of the reef are often visited by blue-fin trevally and other species of jacks. Rainbow runners and schools of black-tail barracudas (harmless) also make a pass along the reefs. If you are very lucky, you might see a rooster fish, dorado or yellow-fin tuna pass by as well. Wahoo, yellow fin tuna, sail fish and marlins roam the deeper waters of the park.

From the boat, one can often see spotted dolphins, and from mid-July until mid-October, southern humpback whales are common in the waters surrounding Coiba. Female humpbacks give birth in the here in the warm waters of Coiba, and sightings of mothers with calves are quite common during that time.

The island is home to 36 species of mammals (and since 2018, an additional 9 species of bats), 39 species of amphibians and reptiles, and 147 species of birds. Some of the land animals have been isolated from the mainland for so long that they have evolved into different species.

The Coiba agouti and the Coiba howler monkeys are a different species from those you encounter on the mainland. Additionally the Coiba spinetail (Cranioleuca dissita), a bird, are endemic on Coiba and occur nowhere else in the world. Coiba is also the only place in Panama where you can see wild flocks of the threatened Scarlet Macaw (Ara macao).